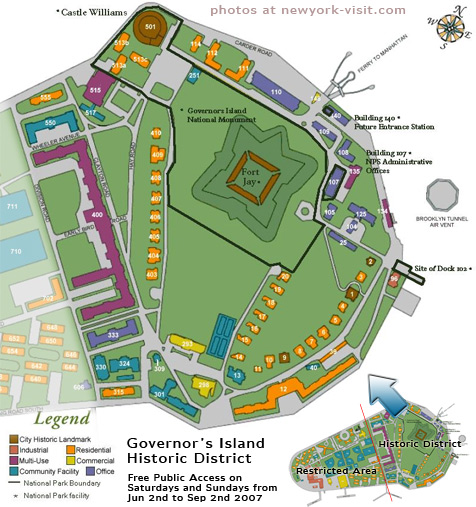 Governors Island is a 172-acre (69 ha) island in Upper New York Bay, approximately one-half mile (1 km) from the southern tip of Manhattan Island. It is legally a part of the borough of Manhattan in New York City. It is separated from Brooklyn by the Buttermilk Channel. The island was expanded by approximately 82 acres (33 ha) of landfill on its southern side when the Lexington Avenue subway was excavated in the early 1900s.
First named by the Dutch explorer Adriaen Block, it was called Noten Eylant (and later in pidgin language Nutten Island) from 1611 to 1784. In 1624, it became the locus for the transformation of the New Netherland territory to a North American province of the Dutch Republic from having been a place for private commercial interests through patents issued by the (Dutch Republic’s) States General since 1614.

In 2001, the two historical fortifications and their surroundings became a national monument. On January 31, 2003, control of most of the island was transferred to the State of New York for a symbolic $1, but 13% of the island (22 acres or 9 ha) was transferred to the United States Department of the Interior as the Governors Island National Monument which is now administered by the National Park Service. The national monument area is in the early stages of development and open only on a seasonal basis, so services and facilities are limited.
The portion of the island which is not included in the National Monument is administered by the Governors Island Preservation and Education Corporation (GIPEC), a public corporation of the State of New York. The transfer included deed restrictions which prohibit permanent housing or casinos on the island. Governor George Pataki appointed NYS Secretary of State Randy Daniels as the first Chairman of the Board of GIPEC. Mayor Michael Bloomberg appointed James F. Lima as first President of GIPEC.
The national historic landmark district, approximately 92 acres (37 ha) of the northern half of the island, is open to public access on a seasonal basis during the summer months. In 2007 Governors Island is open only by guided tour on Wednesdays through Fridays, and to general public access on Saturdays and Sundays from June 2 through September 2 and probably the first weekend of October. The island is accessible only by a free ferry from the 1907 Battery Maritime Building at South and Whitehall Streets at the southern tip of Manhattan.
The Brooklyn-Battery Tunnel passes near the northeast corner of the island, but provides no access to the island. A ventilation building is located just off the northern end of the island, connected to the island by a causeway. At one point, Robert Moses proposed a bridge across the harbor, with a base located on Governors Island; this plan persisted until the intervention of the War Department under Franklin D. Roosevelt.

By Car
There is no public parking at the Governors Island ferry building. Click Here for a map of parking garages in Lower Manhattan.